How to use RNN neural network to predict price in Polish stock exchange. Using Tensorflow and Jupyter Notebooks to train, test and plot data.

Hi! I’m Michał Kostewicz, creator of this blog. I’m living in Warsaw, Poland. I am a programmer by profession but it is also one of my passions. I’m using mostly Java and Kotlin but it is just a tool for me so I often use other languages. My first steps were writing simple Basic programs on an eight-bit Atari.

Recently, I’m a bit fascinated by the stock market and I thought that I would combine my two passions and work a bit more on predicting the price of shares using neural networks. The model of the network that works to solve such a problem is the RNN model, which allows you to predict the value of the next step by analyzing the current one. I found a wonderful blog post writed by Lilian Weng with a description of a model that works well with the prediction of the American stock market. To use the Lilian code I decided to make a few changes and introduce some facilities such as:

In the first place I wanted to find a suitable container with Jupyter Notebooks and Tensorflow. In addition, I wanted to be able to analyze the work of Tensorflow session using the built-in Tensorboard and it turned out that there is a plugin for Jupyter Notebooks that allows you to enter the Tensorboard from the notebook. It can be found at Shengpend Liu GitHub but to be able to use Tensorboard, you still have to install the tensorflow-tensorboard library in a container. I create my own Dockerfile to fix this issue:

One thing to keep in mind is giving the right permissions to the directory (mounted) which will be used to save your work. I gave it full access using the command:

The next step was to find data from the Polish stock exchange. I found them on the site of BOSSA.pl. It is one of the most modern Polish brokers also having API for stock exchange transactions (as one of few, or even the only one on the Polish market). Data consists of daily opening, closing, top prices and volume and reach back to 1991 (the beginning of the stock exchange in Poland - yes it’s so young). I also added a code element that allows downloading current stock data, but only if its not downloaded already today (they update daily). The data includes the prices of all companies listed on the Warsaw Stock Exchange, but for the time being I only use the prices of WIG shares to train model. (you can use few or all of them, just read Lilian blog to learn how to).

The last step and the most important was to adapt the Lilian code to Python 3 and launch the training and testing process in Jupyter Notebook. I use few Python scripts from Stock-RNN project which I adapt to work with data from BOSSA.pl and version 3 of Python. Part of the code responsible for preparing the whole project:

You can configure model changing parameters of DEFAULT_CONFIG, please check stock_rnn/scripts/config.py for whole list of parameters. When you ran this part of notebook you can see WIG stock price plotted - it simple tells you that data is on its place. I added the data directory in case they were not available at BOSSA.pl at one time but at the time of writing this post fresh data are availible every day and you can download it using second notebook cell:

You can configure stock symbol to train with using TRAINING_MODEL_STOCK variable. After while (or more) model is trained and saved. You can easily test it with other stock prices data:

Here I just use StockDataSet to create test data from downloaded stock price data files. test_ratio param is set to 1.0 because all data will be used as test data (class is originally build to create, train and test data with provided ratio). Now its time to test:

Pay attention to the name of graph (graph_name variable) because it needs to be same as graph saved during training process. If you don’t change DEFAULT_CONFIG beetween traing and testing then grap_name variable should be OK. Last but not least we can plot our prediction:

I just use Lilian method but with small changes which allow to plot in Jupyter. If everything is ok you should see result like this: 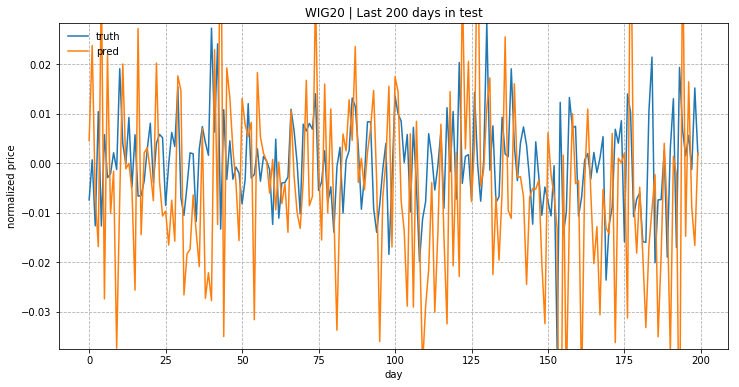 Please remember that price move is normalized and it’s showing relative change rates instead of the absolute values!

This is it! You can find whole project in my GitHub account and I strongly suggest that you read the great work of Lilian.

Please remember that the price prediction of stock exchange shares is very difficult and requires a much richer model and a larger amount of data. Thanks for reading!

You May Also Enjoy

How to write the first Kotlin code in Java project

How to bring image to life using machine learing